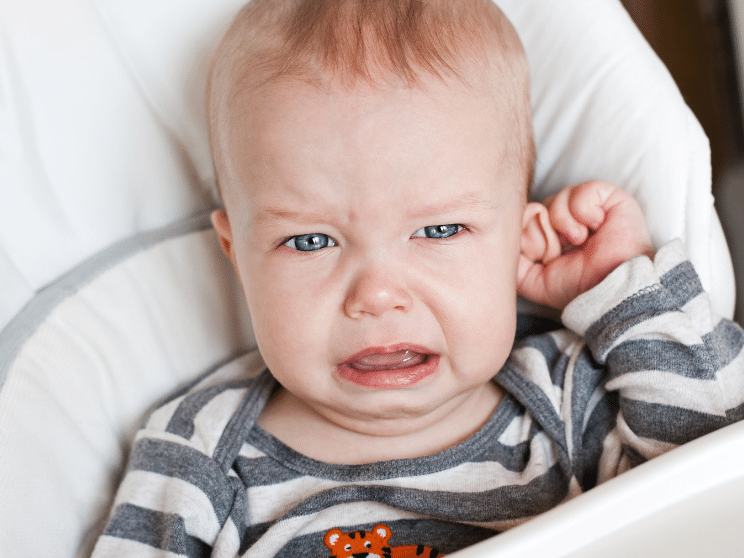 Babies cry a LOT. How can a new parent tell the difference between the many different types of crying? It could be teething, it could be gas, maybe they’re hungry–or heaven forbid they need to be changed again?!? Here’s a quick guide to tell the difference between fussiness from gas and teething–two of the most common reasons babies cry uncontrollably even after you’ve done everything you can think of to make them comfortable.

If you’re breastfeeding, it might shock you exactly how much of an impact what you eat has on your little one’s insides. If you have eaten foods such as broccoli, cauliflower or onions, your sweetie may be suffering from gas as a result of what you’ve ingested. If you can bounce your baby on your shoulder and they calm down significantly, that can be a good indication that gas is the problem–even in babies who are on formula. Babies can also get upset and swallow air (sounds weird, right?) which can cause them to become gassy a few hours later.

Colicky babies have an extreme form of intestinal problems, that can potentially be serious but only in a few cases. If your baby is crying uncontrollably, clenching her fists, bending arms and legs in towards her belly, passing gas and tightening her stomach muscles around a bloated belly more than a few hours per day, there’s a pretty good bet that she’s suffering from colic. Babies with colic also tend to have a cry that has a higher pitch than other cries, indicating their pain and frustration levels. Colic can be caused by a number of things including food allergies or acid reflux, and colic could eventually result in failure to thrive or gain weight. Plus a high level of frustration by her parents because colicky babies require a lot of additional care and holding to keep them calm.

Teething can be one of the easier problems to diagnose simply because it occurs in a standardized timeframe, and you can generally feel the nubs in their gums and see them starting to drool. It can be excruciating for babies, although some little ones seem to be barely bothered by it other than they chew on everything in sight like little puppies (who are probably also teething, coincidentally!).

For whatever reason, teething seems to be more difficult for children to bear at night, so expect to have additional levels of fussiness in the evenings and nights, including a disturbance in sleep patterns. Teething can have an impact on the entire child, including causing fevers, diarrhea, cough and even unexplained rashes. Your baby may not be as interested in eating when they are teething because it hurts to suck or to eat soft foods if they are old enough to do so, and they may also pull at their ears or rub around their chins or cheek area, again indicating that area as the source of discomfort.

No matter why your baby is crying, one of the very best soothing tools you can offer them is a parent’s loving embrace. Sometimes nothing else works to keep them feeling safe and happy and loved, so take a few minutes and just rock them. They grow up too fast!

This site uses Akismet to reduce spam. Learn how your comment data is processed.